When I mention Belgrade is my European city to people who ask, which happens A LOT, I always receive a slightly shocked reply. “Really, Belgrade?” is usually a reply, with raised eyebrows accompanying the rippled forehead and bulging lower lip signifying a bit of surprise and confusion.

Really, Belgrade or Beograd is my absolute European city for many reasons. And over the past couple of years, I’ve made it a point to visit the city every chance I get.

After the initial surprise that my favorite European city wasn’t some top 10 destination city like Rome or Paris or Barcelona settles, it’s always followed by “Why Belgrade?”

Let me tell you a little bit about this amazing city and I can convince you, like many others I have, to visit the Serbian capital.

First, a little Intro to Belgrade

Belgrade is a city that has many different amazing sides to it sitting smack dab in between the beautiful Danube and Sava rivers. Given Serbia’s proximity to Eastern European hotspots, Belgrade also makes for the perfect base to launch from to explore Romania, Hungary, Bulgaria, Croatia, Montenegro and more.

Though it may not be as revered like Croatian cities for the Venetian architecture and Game of Thrones film locations, or lacking the lore and haunted castle vibes of Romania, this city has the best of the Balkans all rolled into one. It’s a city that needs to be explored to discover what is special, like my own first impressions of Belgrade showed me. But once you do, you’ll fall in love.

No matter what the season or weather, there is always something happening in Belgrade and one of the liveliest cities I’ve ever visited. Go to Kalemegdan Park for sunset and you’ll find everyone from students to families and couples sitting in the park or on the walls of the fortress sipping a beer at sunset. In the colder months, you can find warmth within the rowdy smokey (traditional pubs) where locals lock themselves inside for all sorts of drinks, music, merriment, and a bit of communist-era decor. In the summer, the river is flooded with people enjoying the sun or hitting the numerous floating pubs and clubs.

Graffiti and street art lovers, Belgrade will be paradise for you. All over the city, most surfaces will be dressed in a bit of spray paint, and though the bad tags can give a bit of a rough look to much of the city, many parts show off the bright and burgeoning underground art scene here. Massive murals adorn otherwise bleak communist-era architecture to breathe life into the surroundings and quirky cafes are filled artists of all types. Better yet, if you visit in fall, the numerous parks around the city, the fortress, and trees along the river are bursting with autumn colors of orange and crimson.

Unique is a good word to describe Belgrade, because though it may appear a bit more rough around the edges compared to Dubrovnik or Prague or Kotor, it has way more character. You have abandoned historic movie taken over by students to show classic films, cafés inside art studios, floating clubs and bars on the Sava river, and even abandoned hospitals or factories turned into underground nightclubs!

One of my  aspects of the city besides all of its liveliness, beauty, and uniqueness, is just how cheap it is to visit. Prices around the Balkans are skyrocketing as countries like Hungary, Croatia, and Montenegro become summer hotspots, but Belgrade is still super affordable for backpackers. Accommodation in hostels gets as low as 5 euros a night, with private rooms just 12-15 euros a night. Food is cheap too, with a falafel wrap or kebab landing around 2 euros and larger meals around 5 euros. Of course, we can’t forget beer prices which will make your wallet even happier at just a euro or two per pint! Given it is a European city on the rise in popularity, it’s best to book hotels online and have accommodation sorted ahead as Belgrade is becoming a big destination for music and festivals.

Have you been convinced to visit Belgrade for yourself? 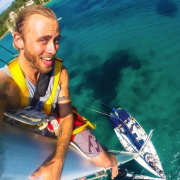